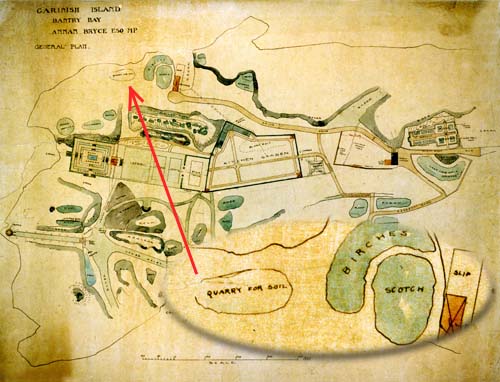 It is thought that the Bryces brought over tons of topsoil from the mainland, but this is only speculation, as there was a ‘quarry for soil’ marked on Harold Peto’s map of Garinish Island. American writer Harold Speakman (1888-1928) describes his encounter with Violet Bryce in „Here’s Ireland“ (1925):

The lady greeted me cordially. ‚I hope,’ she said, as we went up a path made rich by the scent of early roses, ‚I hope that you haven’t heard the ridiculous story about our bringing boatloads of earth here from the mainland!’ ‚Millions of boatloads…’ I quoted. ‚Now where could you have heard that!’ she demanded with some warmth. ‚I never knew anything so stupid!’ ‚It was an old woman coming over the hill,’ I said. ‚But it doesn’t seem so bad to me. If a place were barren and one wanted to live here, why shouldn’t soil be brought from anywhere?’ She looked at me imperiously and a little scournfully. (Evidently this was a subject of long standing and some delicacy.) ‚In the first place, there isn’t land on the mainland to take away; in the second, the thing is too silly. I can’t imagine any one doing a thing like that – except perhaps an American millionaire!’ ‚Whew! This isn’t beginning very well,’ I thought. But in another moment she had forgotten her annoyance and was showing me a path so completely carpeted with fallen pink blossoms that in places it was entirely hidden from sight.

However it took years to enrich the existing thin peaty soils which was mainly Murdo Mackenzie’s achievement as he was known to collect leaves and other natural debris from the mainland to enrich his compost heap. In the Irish Times from 13 February 1931 the issue was described as follows:

The greatest compliment paid to Mrs. Bryce is the legend that all the soil for the garden had to be imported: some say from the mainland, and some say from England. This of course is quite incorrect, the fertility of the island being due to its own soil and climate, together with a great deal of well applied industry. In fact there is no reason why the mainland should not yield the same results if properly cultivated, and the possibility of fruit-farming in the district is one that could well be investigated. 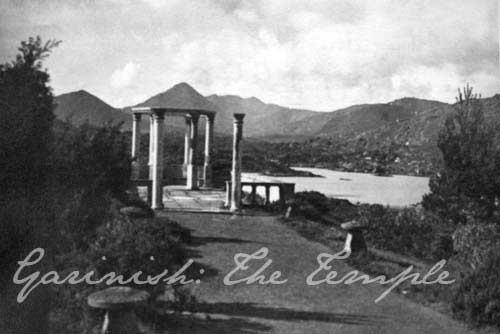 Unfortunately another staddler stone along the path to the temple lost its ‘cap’ recently.

Will this and the other lost upper parts of those devices (which were once used to protect the grains against mice and rats) be replaced for the next season? Have a look at the old photograph, spot the difference to the nowadays terrace!

This feature is one of the signatures of Harold Peto. In his own garden in Iford they are placed along a very steep path leading to the Edvard VII column.

A phantastic grant for Garinish Island: € 2.4 million for restoring the gardener´s cottage into a island museum to tell the story of the island and its occupants. This may be the time now to tell the story of the O´Sullivan-Garnish-family who lived on the island in 1910 for the very first time! Did you know? So let’s hope that not only the great byzantine marble tomb – which is now perfectly cleaned and sitting in the back of the casita – will get a worthy display in the near future. According to Harold Peto’s plans it was to be incorporated into the north facing wall of the never built mansion (you would have seen it climbing the slope after the many steps from the eastern gate of the walled garden). 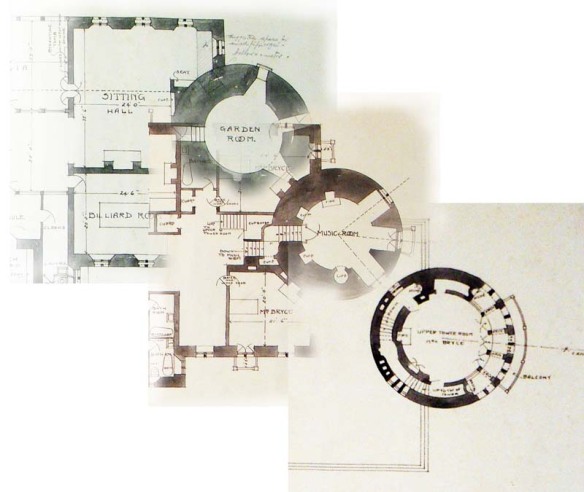 According to Harold Peto’s plans the lower floor of the Martello Tower was to become the ‘garden room’, the first floor (which you still can access through the steps) was to become the music room (right he was, fabulous acoustics!) and the wall around the nowadays 360-degree-viewing-roof was to be extended and provided with a roof. A view through a balcony straight to the temple across the Happy Valley should have made ‘Mrs. Bryce’s room’ a real exquisite hideaway. Her and Annan Bryce’s bedrooms were planned to be left- and righthand to the music room. 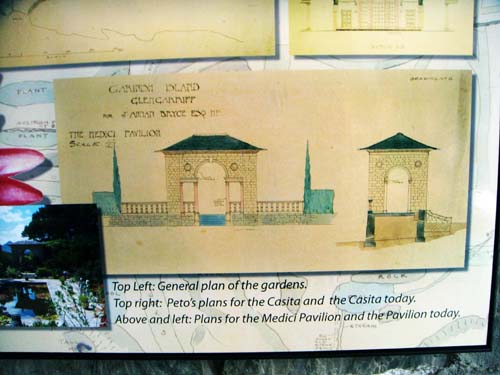 An exhibition outlining the history and development of Garinish Island opened to the public in Glengarriff. Sited in the Tourist Information Office, the exhibition is a series of six panels devised and researched by Jim Larner. The panels feature stunning images of the plant life of the island garden. A unique feature is the reproduction of the original architect’s drawings by Harold Peto.