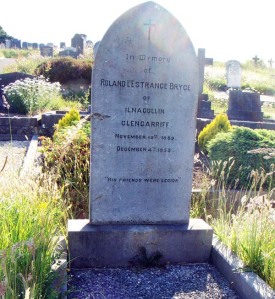 After Violet Bryce, the co-founder of Garinish Island (or Ilnacullin as she preferred to name it) died, her son Roland L’Estrange Bryce continued her work. The passionate amateur botanist and gardener further developped the plantings together with head gardener Murdo Mackenzie. Roland suffered from very poor eyesight and – according to photographs of his later years – from obesity. After he fell ill during a visit to London the had to undergo surgery but he died on 4th December 1953 at the age of 64 in a hospital quite near to his former family home in Marylebone but was laid to rest at “The Abbey” in Bantry. He bequeathed the garden island “to the Irish people”. In a newspaper from 1940 article he was described:

Here is a big broad-shouldered man, red-haired, bushy thickets of eye-brows above his sholarly spectacles, open-complexioned, very Irish – and proud of it. His broad sturv hands touch a plant with the gentleness of a surgeon – are they not the children of his mind and imagination, and of his daily care? Over steep paths, along bays lined with tall birches and over terraces with fountains smothered under maidenhair, we come back to the little house, so hidden in the foliage that no tourists ever espy it. Electric light (1940!) glows up over the hundreds of books on the white lacquered shelves. The Squire of Ilnacullin speaks of Oxford, were he studied; of Belgrade, where he was Times correspondent; of Carinthia and Montenegro, where as a diplomat he supervised plebiscites and elections. Tea is poured from a lovely silver hair-loom. Fritz, the big silver-haired Schnauzerdog, inspects the home-made cakes.

Various obituaries described his career and his passion:

Mr. Bryce was a well known horticulturist. He retired to Garnish Island on the death of his father and added to and maintained the already well-known collection.

After a distinguished course at Oxford Mr. Bryce became attached to the British Foreign Office and served in the 1914-18 war. His attachment to Glengarriff was so keen that he sacrificed his career to take up permanent residence there. He was later entrusted with the task of settling the boundaries of Yugoslavia, then Serbia. His father was Liberal M.P. for Aberdeen in 1917 and his uncle, Lord James Bryce, was at one time Chief Secretary in Ireland.
Mr. Bryce was at one time Vice-President of the Royal Horticultural Society of Ireland and Governor of the Collge of St. Columba, Rathfarnham, Co. Dublin. He was also president of the Glengarriff Tourist Development Association and the local golf club.
Mr. Roland L’Estrange Bryce has been appointed peace commissioner for the County Cork and the adjoining counties in 1939.