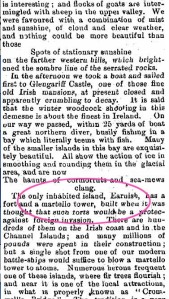 Remember: An Irish family, the Sullivans, lived on Garinish Island, before the British family of the Bryces bought it in 1910? The interesting story unfolds thereafter: What happened to the bog, the cows, the potato ridges of the Sullivans on Garinish Island after 1910? Anything you know about it? The clipping is from The Southern Star 25th July 1896.